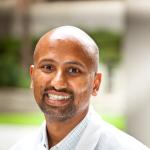 Sriram Shamasunder completed his residency in Internal Medicine at Harbor UCLA Medical Center. As a physician who trained at a public hospital and has provided medical care abroad, Sri is co-founder of the HEAL Initiative, a health workforce strengthening fellowship working in Navajo Nation and 7 countries around the world. HEAL currently has over 50 fellows in 2016.

He was awarded the Young Physician of the Year in 2010, by the Northern California Chapter of the American College of Physicians and was named an Asia21 fellow by the Asia Foundation in 2012.

Sri was a Fulbright-Nehru scholar to India in 2012 studying innovations of care among tribal health organizations throughout rural India. He is interested in a solidarity that allows for narrative equity as well as health equity. In 2016, he gave a Berkeley Ted X talk entitled "Whose Suffering Matters Less, and Why"?